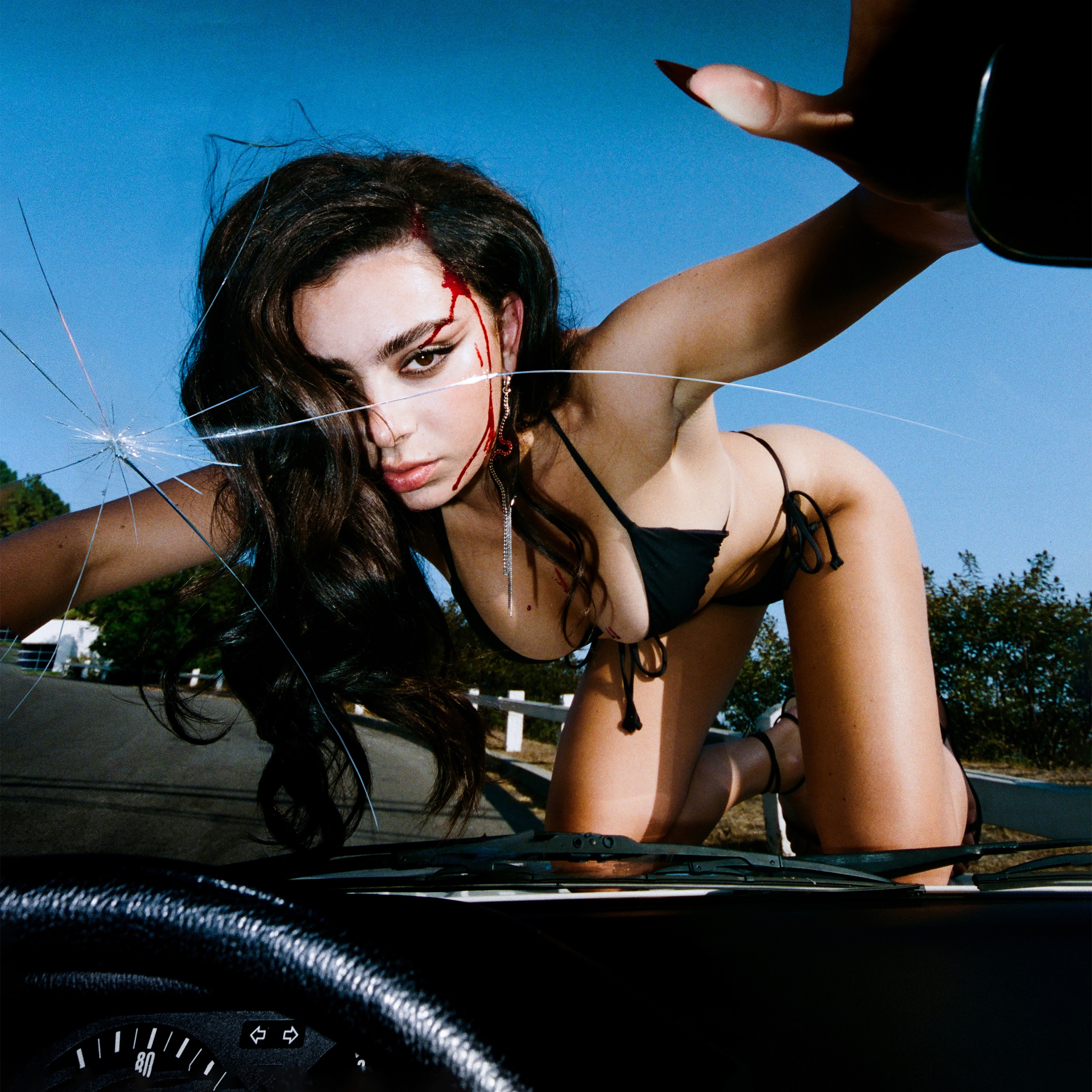 Even if Crash lacks the immediacy and heart of her past work, Charli is addressing the culture industry of our times like no one else.

Pop innovators taking left turns are always sure to produce marmite records. Crash arrives with a knowing nod about what it offers in that regard – Charli splayed across the cracked windscreen of a smashed-up car, her make-up as on point as the fake blood, her hair and lingerie as hot as they are deliberately styled. Welcome, everyone, to a pop record that intends to sound as tacky and overproduced as it does.

Against her previous work, the turn away from the immediacy of her Hyperpop and Bubblegum Bass style leads her new sound, an exploration of late 80s and early 90s commercial fluff, to sound softer in comparison. Hints of Whitney Houston, Janet Jackson and early Kylie abound, the record takes lavish notation from the Dance Pop and New Jack Swing of the era. A few detours to 2 Step and RnB are thrown in for good measure.

So effective is her recreation that you can practically see the album being conceived around a massive ebony boardroom table in downtown Los Angeles, the producers and label managers dreaming of how much coke they’ll be able to buy with the profits. Be under no illusion, however, that Charli’s vision isn’t utterly at her command. The wealth of photoshoots that have built up this current era of hers since August last year confirm that.

It’s for this reason that the deliberate tackiness makes sense. Regular hints to selling your soul for success and the dead-eyed expression she’s given in almost every shot have created the persona of an artist birthed by the industry being eaten alive by its creator. The plastic pastiche of the music is so wonderfully contrasted by the underlying violence of her imagery, a purpose-built sex symbol with undertones of satanism.

“Where you expect it to hit hardest on the Rina Sawayama collaboration ‘Beg For You’, the track ultimately falls short of the era-defining queer banger it could have been.”

But it’s hard to get past the messiness. The record lurches about in places, especially towards the end, and lacks an overall flow. Individual cuts stand out, but the styles too often clash uncomfortably with one another. As tight and refined as its aesthetic is, the listening experience is underwhelming.

More specifically, the record is marred by an unavoidable hollowness, part of which has an appeal amongst the excess of its production. But a lot of it comes from a sense that Charli’s songwriting isn’t flourishing as much as it ought to, settling for more “ooh-ahhs” than usual in place of lyrics. At 33 minutes in total, it would be rude to call any of this filler, but the more uninspired cuts are difficult to avoid. Where you expect it to hit hardest on the Rina Sawayama collaboration ‘Beg For You’, the track ultimately falls short of the era-defining queer banger it could have been.

At its strongest, the album delivers moments of brilliance. ‘Good Ones’ is and remains a total thrill, pulsing with that absurdly tasty synth hook. ‘Yuck’ offers one of the most rewarding cuts, an anthem for those of us with insecure-avoidant attachment styles, and sees Charli joining in on the third-wave Disco hype. ‘New Shapes’ is a supremely satisfying collaboration with Christine and Caroline.

Charli certainly isn’t lacking in confidence, nor does she sound confused or searching for a direction here. Nor does it feel like anything is underdeveloped – this a complete package from artist to art, everything aligned as intended. What falters is the depth of the songwriting; there’s no heart to it, and the magic that has made her previous work so captivating isn’t present. Intentional or not, that hollowness makes this a difficult record to invest in.

“[With the industry turning] entire decades into instantly-deployable plastic fantasies, Charli tells the cautionary tale of a sexulised pop star breaking out of the in the late-80s/early-90s construct-world she’s been confined to.”

Luckily, however, there is a greater context at play here. Coming to the end of a five album record deal that she signed when she was only 16, and having dealt with desires from her label to be ‘more authentic’, the persona of a manufactured pop star gone violent certainly feels like a more authentic expression than posting pictures of your dogs on Instagram for the sake of being relatable.

It’s no wonder, then, that she has chosen to set her album in sonic history. Our current cultural relationship with the past – streaming services festishising the 80s, 90s and 00s for every new teen drama, Depop begging us to buy more overpriced vintage-Y2K-McBling-Bella-Hadid-Kendall-Jenner-slaycore clothing, and mainstream reboots galore across film and TV – is driven by corporations wanting to cash in on safe, already-known aesthetics. As the money turns entire decades into instantly-deployable plastic fantasies, Charli tells the cautionary tale of a sexulised pop star breaking out of the in the late-80s/early-90s construct-world she’s been confined to.

The constrictiveness of media that seeks to recreate the past, not reinterpret it, means that new expression has to become increasingly extreme. Satantic imagery, car crashes and gothic rituals are presented as an endgame to this obsession with pre-made culture. Most touching of all is how fabricated she makes those extremities – every drip of blood is perfectly placed, a knowing nod to the fact that today, even the most ‘real’ things are highly coordinated operations. Her persona on Crash is more than just a fun idea; it’s an assessment of the consequences of manufactured culture.

“As she stares deadpan back at you in the wealth of imagery accompanying the record, evoking deal-with-the-devil, sell-your-soul success, an album piling in on cravings for nostalgic aesthetics makes perfect sense.”

On the surface, it would be easy to be disappointed by Crash. Less daring and intense than her previous work, the hope that it might turn around and whack you sideways falters as the runtime wears down. But in the context of the end of a five album deal, a record sublimely melding the current cultural obsession with the past feels astute. As she stares deadpan back at you in the wealth of imagery accompanying the record, evoking deal-with-the-devil, sell-your-soul success, an album piling in on cravings for nostalgic aesthetics makes perfect sense.

Part of me feels that the songwriting has been hemmed in by the need to achieve the aesthetic of the album, and in that regard, the idea of Crash is perhaps more enjoyable than the record itself. But to disregard what it signifies over a lack of songwriting depth is cruel – she continues to prove how adept she is at reading the times and our ever-evolving relationship with the culture we consume.

Charli has orchestrated a crash just as manufactured as the pop industry itself. Her persona is precisely crafted, the smashed windscreens and devil imagery specifically chosen. And perhaps if her character itself is making deals with the devil, the sound of her album sells its soul at the altar of past aesthetics, betting its existence on the nostalgia cash-cow. Crash captures, criticises and bathes itself in our obsession with the past, resulting in a wickedly tacky, overproduced concoction for which she is in total control. The snake eats itself at her discretion.

Listen to ‘Beg For You’ and all the other new music taking my fancy right now on the Sourhouse MUSICBOX playlist.